by Andy Downes
A little more information on this subject.

Yesterday I spoke to Len Bridge at Goodwood, Len worked with Chris Lawrence at LawrenceTune in the early 1960s. He was a key member of the 1962 Le Mans Team (spending the race in the Mulsanne signalling pits if I remember correctly).

I asked him about subsequent Le Mans entries following TOK in 1962 - apart from Chris returning with the Deep Sandersons in 1963/64 etc he said there were none with the +4. I suggested that the entry we 'found' for 1966 might have been with the +4 SLR, he agreed it would have made a lot of sense but didn't think it happened and certainly wasn't aware of it.

When asked about working with Chris Lawrence he said it was hard work, long hours, could be difficult, was exhilarating, frustrating, but most of all exciting and a lot of fun. Apparently the whole team would be busy trying to keep up with demand and multiple 'projects' - when Chris would fetch up and announce out of the blue "I've agreed with so and so that we'll do this by then", throwing the already flat-out employees into another period of the seemingly impossible. So it's perfectly possible that Chris had set something up with Peter Morgan and hadn't dropped the bombshell on his ususpecting workforce - making an entry (in early 1966) of course is not the same thing as getting accepted and actually turning up with a race car.

by John Clarke
Hi Andy
I am pleased you met up with Len Bridge at Goodwood. I had a number of telephone conversations with Len as I was going to do a short biog for my book but I just ran out of time.

The remaining Le Mans guys are all getting on now and their recollections will soon be lost. These are my notes from my conversation with Len that were not included in my book. The ‘66 entry wasn’t mentioned but then again, I didn’t ask.

Early History: Len was born in 1934 and recalled going to Crystal Palace as a boy where he saw his first motor race. Len did his National Service in the Fleet Air Arm, training to be a pilot on Fairey Fireflys. He missed going to Korea and by 1956 had a job at Rotax – the aircraft part of Lucas. He was a Technical Author in the turbine laboratory where CJL and Les Fagg were working on large starter motors (6 inch diameter) for big turbine engines. At various times Len was running either a pre war 3 ½ litre Jaguar drop head coupe, a Vale Special (with Singer Le Mans engine) or an Austin 7. Any thoughts of motor racing were a fantasy.

At Westerham Motors: In ’59, Len left Rotax responding to CJL’s plea of being “snowed under”. Work had increased dramatically largely from the publicity generated from winning the Freddie Dixon Trophy. CJL and Len were the only engineers, the other employee’s, Les Fagg (ex Merchant Navy) and John Harvey were assigned general work and engine assembly respectively. Len also helped manage the business.

On the Deep Sanderson: By the summer of 1960, Len’s whole emphasis was the DS 101 (Morgan development was put to one side). Talk was around using the FIAT engine rather than the Ford 105E. CJL had designed a ‘trapezium’ chassis using VW front and rear suspension. Len recalled the cars were “hopelessly un competitive” in Formula Junior. They were very slow in practice at Goodwood when after two laps the throttle cable snapped (we didn’t put a ‘stop’ on the throttle) then the car became stuck on the tow rope! By the middle of the year, Len turned his attention to gaining his competition licence by competing regularly, sometimes doing double races at a weekend. But he admits, he was slow, sometimes getting lapped in 10 lap races. Then there was CJL’s desire to build a front engined (TR4) 2 seater sports car based on a tubular backbone chassis. After the chassis broke with 4 people standing on it, “it was mercilessly never finished”.

"CJL came up with three bright ideas a day but most were rubbish". Len considered CJL was a “forward looking dreamer”.

On Morgans: Len recalled coming back from the Morgan Factory after talking with PHG to supply a chassis for the 1000km Nurburgring race. They discussed having a stiffened chassis (triangular fillets), a strengthened front frame and improved camber angles….but nothing came of it.

On 62 Nurburgring: I was driving DS301 when the steering broke and I crashed. The steering arm was of poor design and manufacture. I was team manager for 4 Morgans and the DS. It was hard work.

The rest of my notes have been incorporated in my book and I hoped to visit him in Dorset at some time as he was full of stories and anecdotes. I was unable to verify a lot that was said and I took it at face value. 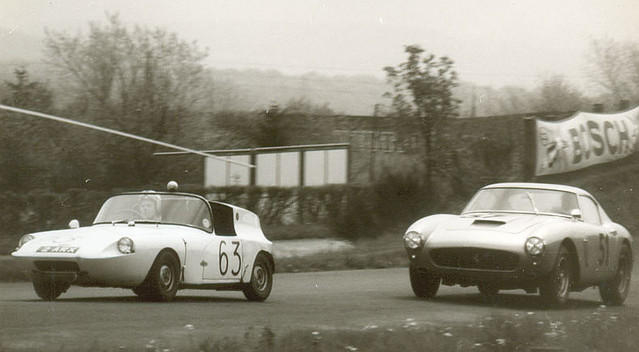 Not of any great use to the thread's topic, but some may find it interesting.

by John Clarke
This '66 Morgan entry has intrigued me. I think Andy and co are correct, it was more likely to have been for a Morgan SLR, fitted with a TR engine and
a Lawrence Tune cross flow head. But which one?

Re reading Morgan Maverick....Chris mentions that Peter Morgan and the factory saved his part finished SLR (based on 170 GWP - the 62 Le Mans back up Morgan) from the liquidators in '64. He was at the time out of action, in hospital, recovering from the huge accident in France in his Corvair. He mentions that by September '65 he was back on his feet and managed to resurrect Lawrence Tune and take possession of the remainder of his tools and the SLR.

So perhaps the factory did put in an entry on his behalf for him and Chris Spender (??) to race in '66. Perhaps too much conjecture. As Leigh mentions above, perhaps only Chris Spender, now in his 80s, may know.

As it happens I'm in correspondence with Chris Spender (now prefers to be known as 'JC' Spender) and have recently sent him a copy of Chris Lawrence's book 'Morgan Maverick' - as he was not inclined to buy it when it was first published.

My impression has always been that JC was heavily involved working at the LawrenceTune company in the 1960s, but it appears his presence was more intermittent although over quite a long period - thankfully he did find time to do the initial body design sketches for the SLR. These days he's an academic and a visiting professor, still very lively in later life !

I will enquire about the possible subsequent Le Mans entries.

by Mark Shears
Like Andy and I am sure John, I too would be intrigued to know the answer - if there is one.

Looking at the period photo taken at the Nurburgring of the Deep Sanderson 301 about to be passed by the Ferrari 250 SWB is that not the most ugliest of little cars being overtaken by possibly one of the most beautiful...?!

by John Clarke
Must see film doing the rounds - "Ford v Ferrari" with coverage of Hollywood's version of Le Mans in 1966.

One can't help but wonder how a Morgan +4 SLR would have fared?? Very strong entry by Porsche with the 916 that year taking first 4 places in the 2.0 litre class.

Shame that Eric Broadley, Lola cars and Slough weren't mentioned but it was a film made to entertain!

by Leigh Sebba
Film seems to be called Le Mans 66 in UK – apparently not allowed to use a copyright car name in the film title in UK.
I saw it with ex LM racer Tamsin in ‘4D’ where the seats shake and exhaust fumes are pumped through the cinema.

by TonyLees
Jen and I saw it (Ford v Ferrari) in Denver - the seats "power recline" so you can have a nice nap.

by Leigh Sebba
Well we saw it in exotic Enfield.
A few years ago we visited relations in Boulder (very near Denver) one weekend en route to a ski holiday. Reading a car mag on the plane over I saw a photo of a Cobra was attributed to ‘the Shelby museum in Boulder’.
It is only open on Saturdays and well worth a visit. Top cars well displayed and all very low key.
https://shelbyamericancollection.org/

PS
At a Goodwood meeting I saw some Americans with Shelby Cobra shirts and I asked them if they knew of the museum. Transpired they were Shelby’s family !

We've exchanged information on this 'phantom' 1966 Le Mans entry but having discounted it, I came across this over the weekend in the MotorSport archive - you'll need to read it carefully to spot what we're looking for !

by John Clarke
Oo err. A good read about Chris Lawrence. For those without the time to wade through his article, the salient part Andy is referring to is:

Clive Richardson wrote in Motorsport May 1974

"In the sixties too Lawrence built the sleek SLR bodyshell for use on Triumph or Morgan chassis and ran one for one of his seven Le Mans appearances. Three were built, a dismantled one of which rests in a corner of the arches."

John Clarke wrote: ↑
Tue Jun 16, 2020 8:20 am
For those without the time to wade through his article, the salient part Andy is referring to is:

It was deliberate, to prompt you to get your Sherlock Holmes magnifying glass out, and to build the expectation !

Of course it's possible the journalist 'lost it in translation' when referring to the Le Mans visits. I'm presuming the SLR in the corner was Chris Lawrence's own car before a rebuild and prior to his departure to the USA - when he gave the SLR to Edgar Wallace and Tony Howard who had worked with/helped him at LawrenceTune. Car now owned by Keith Ahlers of course.

I guess the 7 Le Mans entries being referred to are

No apology necessary, I wasn't trying to make a point, in fact I went back to the article to check !