Leigh, partnered by Peter, and Simon, partnered by Richard, are competing this weekend at the Silverstone Classic in their Le Mans Series 1 Morgans.

The full entry list for the Pre War race is here 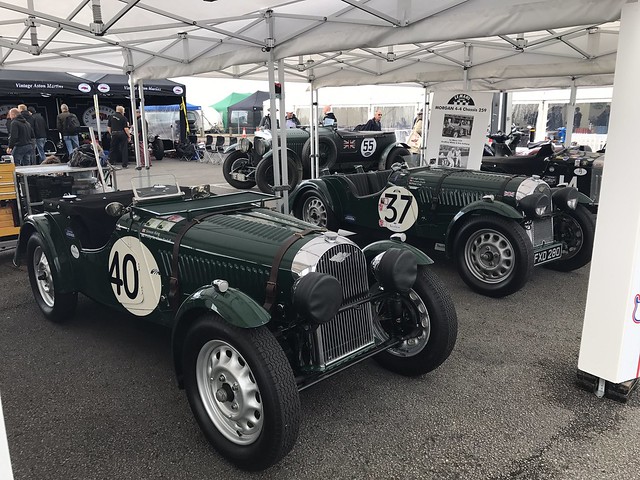 Sock it to them boys

Re: Le Mans Morgans at Silverstone Classic this Weekend

Hi John – thanks for such encouragement but (maybe as you are the other side of the world) the definition of ‘this weekend’ is a bit early and the race is on 27 July.
Unless I have got the wrong date – not impossible – I did once turn up on the wrong day for a Mog race.
Top

Re: Le Mans Morgans at Silverstone Classic next Weekend

Thanks Leigh
Heading altered for UK.readers! Even + 7 hours ahead here perhaps was a tad premature. Will have to change it back in a few hours!!
Top

It is typical Perth (Oz) weather at present
Top

Not a great weekend for the Series 1 mogs. This was Leigh's report:-

"Big grid and much fuss for Bentley centenary so although based in old pits the race was held and pit stops in new pit area.

Practice for me ok if a bit slow (although Peter hardly any better) not convinced about the engine that didn’t seem to rev well in 3rd although none of the misfires we used to have.

I suppose the F1 Vale corner adds a few seconds (?). Felt something on my knee and at end of session found the red cut out switch had vanished and we couldn’t find it anywhere on floor although it did turn up on Saturday eve.

Unfortunately Simon only did a couple of laps (and looked a pretty good time to me) when hit an out of control Swiss car and Simon’s car quite damaged. Co-driver Richard never got a go.

Then all the logistics of starting our race from the old paddock which meant we set off from old paddock onto track with both drivers in the car – I am sure some spectators thought we had a ‘riding mechanic’.

Then much razzamatazz (brass band !) at new pits (and a cheery greeting from Horsman which was nice) we started race around 6pm in dry weather.

Rather annoyed the pace car didn’t let everyone bunch at start so it was very strung out (I think that happened in other races too – perhaps they think it is safer) so I was well back and didn’t really go too well – quite soon perhaps as I had started so far back there were some quite hairy cars overtaking. The track was dry but the light was a bit gloomy.

Anyway - did my stint and Peter got in and did a couple of laps. We hadn’t missed him when I got a message from kids watching from a grandstand to say he was parked up by the track ‘ although everything looked fine’. So had to wait for end of race and then I opted for the ‘wrong bus’ back to old paddock which took ages to leave. Found Peter with Brian (who was supposed to be having a non-working w/e with his boys camping !) and Brian was checking the car. Eventually found a faulty ign / lights switch and by passed it so could drive car through tunnel so I could load it up."

Thanks to Leigh for a great report.....just shows the trials and tribulations of racing.