My First Race (Morgan Challenge or other)

My First Race (Morgan Challenge or other)

Inspired by Kelvin's post in Who, What, Where, When...I thought this might be an interesting diversion during lock down and maybe, maybe, attract more competitors to the Morgan Challenge...or maybe not based on my experience!!

Thruxton Easter Monday 1995, what was I thinking?

I set off from Great Missenden in my 1967 Morgan +4 Super Sports. The weather was overcast, chilly but dry…..me nervous?… you bet I was. 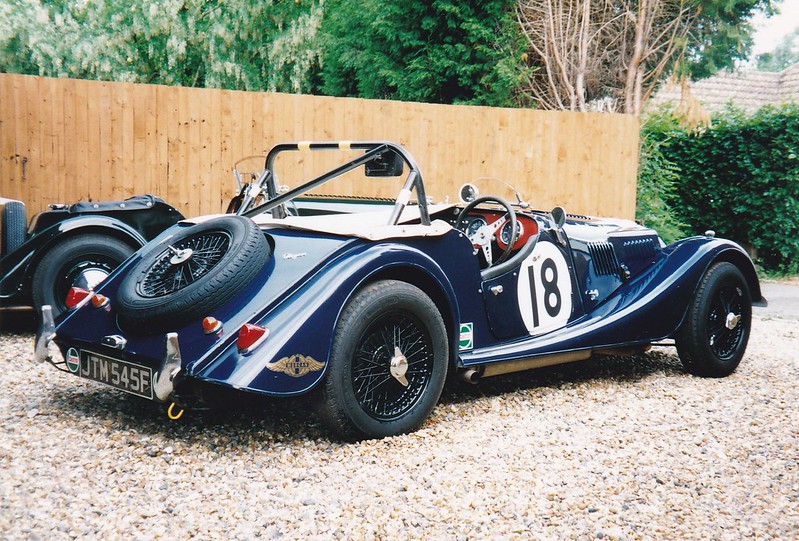 Check out that white tonneau

I had left Sarah at home in the warmth nursing her bump. Our first baby was due in August and I am off risking my life and limb for what?

Nearing the circuit after a near 2 hour drive, the traffic was building up as the public had come to see F3 and Rover 200 Turbos. All the signs proclaim “Motor Racing is Dangerous”….

Skip to qualifying. Time 11.25am. 15 Morgans take to the track. I am joined by two other first timers, Chris Acklam and Simon Orebi Gann, both in their +8s. Do they know what they are doing?…cos I certainly don’t.

Qualifying is over in a blur and the times are out….I’m 14th out of 15…at least I’m not last. Simon has qualified just ahead of me and Chris just behind.

And then it rained….and boy, did it rain. At 6.00pm we are ushered out onto the track, a very wet track and it’s still raining. We are given two green flag laps and pass numerous Formula 3 cars squished against the barriers. Serena Aston reported “the weather was appalling…..This must have tested the nerves of the new drivers who were really being thrown in at the deep end”

We all arrived on the grid but what’s that…Klaus Nesbach is lined up behind me in his Class A Morgan having been penalised for an underweight car. This is the guy who went around corners so fast until he spun taking a reading off his g meter so he knew where his limit was!

I sat on the grid and gesticulated wildly to Klaus…go left, go left. And then we were off in a ball of spray and I was very relieved to see Klaus disappear up the road. After that…I have very little recollection of the race. It was all extremely wet and very frightening. All I could do was try and keep the car on the track as other Morgans spun all around me. The chequered flag came out and not a moment too soon…I had survived!

The results are shown below…I hadn’t come last which was nice, but was it worth it? I vowed never to race again….. 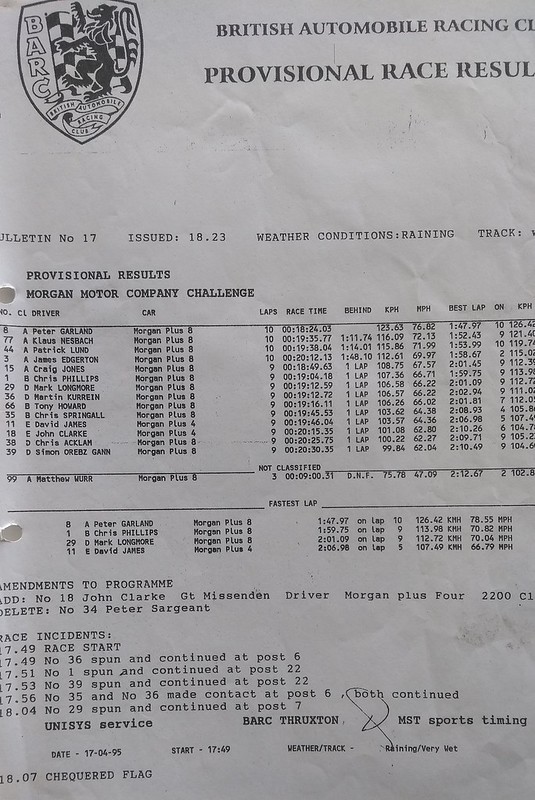 Post Script; Jonathan was born at the end of August and I went on to compete in about 100 races!

John,
As the person to blame for dragging me into the clutches of the Morgan Challenge back in 2006, you must now make amends. I am looking for personal memories to accompany photographs from a particular year for the MOG Magazine. Chris has covered 2007 and will grace the pages of the March edition, I have 2008 and 2010 covered, however, i need a guest contributor for 2009, can/are you willing/able to produce about 1000 words on your personal memories of that year? Hopefully it will not be simply a list of 'races I did', but reflect the times and the ambience of series. The above piece is perfect in style, and I would love to use it in MOG or maybe in Miscellany if Charles likes the idea.

PS: I have enjoyed the company and friendship of the Morgan Challenge enormously over the years, thanks to you.
Ace Photograp…… you know!
Regards
Top

Thank you Simon, the idea is to proceed year-by-year, and I would be happy to have your recollections of 2011, presumably your 'rookie year'.
I will send you some pictures to refresh your memory (if needed) If all goes according to plan your guest appearance will grace the July edition, so plenty of time to forget about it.

Hi Bob
Happy to use "My First Race" in Miscellany or Mog Mag but 2009 is a cannot help i'm afraid. I was heavily involved in the Morgan Centenary at Goodwood FOS, Revival and S'stone Classic in my Series 1. I only did 2 races in my SS, the TT at Silverstone BDC and the Tucker Trophy at Brands. Looking back, my last full season in the Challenge was 2000.
cheers
john

June 1969 in my immaculate new 4/4 I entered a Morgan Club sprint at Santa Pod with such ‘names’ as John Lindsay (Mr Mary), Rob Wells, Chas Smith. There were over 20 Morgans including three +8 cars which looks odd on entry list as they enter under Morgan 4/4 Club (as its name was then).

June 1975 a trip to Prescott. I remember it well as I set off from North London the day before with tent in the back. Arrived at the village but couldn’t find the venue – just an E Type driving up and down the street. Stopped to chat and realised we had both mistakenly driven to Prescot near Liverpool – quick blast down M5. At Prescott Roy Lane did 44 secs and I did 63 secs !
Interesting looking at the program. I see Richard Colton (previous driver of my +4 JNV who famously left £6m worth of Ferraris to charity when he died a few years ago) was entered in two 1960s Ferraris and a third for his wife.

So – first race. Looks like its Snetterton May 1975. Not sure why I chose that as seem very few Mogs in the sports car race – Pat Keen, Myke Bluston, Ian Giles – perhaps Myke Bluston and Rob Wells persuaded me. Rob was racing his Reliant 750 car. Race winner David Ham in Lister Jag and I seem to be thrown in with a C Type (Dave Duffy) and a Maserati 250s (Peter Martin) so nothing like starting ‘big’. Also some familiar names – Frank Lockhart in his Rover that always used to race at BDC, Clink and Chris Bird (that Mary will know) and Alastair Naylor, Roy McCarthy both who were big in MG world.
It was an 8 lap race and I finished 2 laps down (but beat the C type that retired).
I remember nothing about it but in those days racing was less of a major occasion. No ARDS test, much more relaxed about clothing and car spec, and most Morgans would drive to the circuit.

Then Snetterton June 1975 with a much bigger Morgan entry so it looks like a race of about 14 T series MGs and about 14 Morgans (8 were +8s). Winner was Robin Gray in the Lawrencetune +8, followed by Chris Cooke in his lightweight 4/4, and then Pat Keen in his +8. As I recall, if it looked like a Morgan it was allowed in. And nearer the back I see that I just pipped Mary Smith (now Lindsay). Presumably she was in the 1950s Plus 4 that I now own whereas I had my ‘modern’ 1969 4/4. The start of a ‘beautiful relationship’.

Have a photo from 1977 BDC Silverstone and looks like am racing in a leather jacket ? Can anyone recall when fireproof race suits came in for club racing ? Was it 1986 with the spec of that year ? Looking at wiki it seems initial race suits used asbestos – possibly a contribution to Steve McQueen’s cancer.

PS Re my first race won by David Ham. Have just googled him and it even gets a mention in his obit. I certainly never realised I was racing against such exotica

'' David raced first an Aston Martin DB3S before acquiring in 1963 the 1959 Le Mans-winning Aston Martin DBR1/300……..After some outings with DB4GT and DB5 Astons, in 1969 David acquired the unique Ecurie Ecosse-bodied ‘knobbly’ Lister-Jaguar BHL111 with which he became synonymous and which he campaigned not only in the JCB and Lloyds & Scottish Historic Championships and other historic races in the United Kingdom and Europe but also in various events in South Africa, Australia and New Zealand with considerable success. In 1975 David was victorious at Phoenix Park and Snetterton…………….
http://www.brdc.co.uk/Notice-of-Death-- ... 940---2016''

When I joined the MSCC in 1976, the first people I met were John and Mary Lindsay. Mary (shy as always) asked – “What are you doing a week on Saturday ?”
Me: Nothing why ?
Mary: Do you want to go Motor Racing ?
Me: I’ve always wanted to do that !
Mary: Great, we’re doing a 6-Hour Relay at Silverstone and we need a Runner.

And so I duly arrived at Silverstone (hiding my Austin Healey Sprite away from the Paddock) not really knowing what was happening and unsure what a Runner was – I soon found out.

Practice, as we called it then, had been halted because a car had lost a wheel, it turned out to be Mary and ‘HG’ her Series I which was being recovered on the back of a truck. Disaster ! Bob Northover was the Team Manager and he immediately offered Mary his +4 ‘Poppy’ for the race, quickly scrutineered and all was well again. Well it was until Andy Garlick arrived from the track with a very sick sounding MOG 615, his yellow +4 racer, he was miserable. The +4 was supercharged at the time and had comprehensively blown a head gasket, not even his ace spannerman Ron Brown’s magic was enough to fix it. The car was the fastest in the Team and we had been handicapped on that basis so Andy’s loss was keenly felt and he felt he’d let the Team down (which he hadn’t of course).

I remember little else of the race apart from my duties:

Andy, can you run over to the Pits and ask Bob Northover...

Could you run back to the Paddock and grab the toolkit with the big spanner...

Just run to Andy Garlick and see if he has a spare stopwatch with him...

So, that was my introduction to Motor Racing and why I can’t shake off the “Holly Birkett 6-Hour Relay”. Boy did I discover what a ‘Runner’ is – I walked straight into that one !!!

In order to boost sales I can tell interested parties that John's post here, forms the basis of the MOG Magazine's leading article this month. Thank you John, a copy is winging it's way to you courtesy of MOG.

Maybe our other contributors might be happy to see their stories in print.

Not the best April fools day offering I have seen Bob !
Top

Good article John & Bob and thanks to Bob the mag is becoming the Morgan race magazine with his analysis of past winners, an article by Mark Shears, and a competition by Bob and Peter Cole. Also a reference to Jeremy Holden rolling his Mog at Donington – and driving home in it after. And an article by Pete Mountain including comments on his race team management at the Willhire 24 and son Jim’s racing
Top
Post Reply
10 posts • Page 1 of 1